Sensei Jason Romer has been training in Shorinjiryu Karatedo for in excess 20 years. He started his initial training in the late 1980’s as part of the Australian Shorinjyru Karatedo Association. The Seishinjuku Dojo was officially opened in 2010, in the Brisbane suburb of Bardon and is the Australian representative for the Shorinjiryu Kenyukai Watanabe Ha Federation. Jason is currently ranked Godan – 5th Dan Black Belt.

During this time he has competed at a Regional, State, National and International level. He is an accredited coach, and has many years’ experience mentoring and coaching sportspeople of all ages and abilities.

Sempai Jarrod began martial arts training aged 7 years of age, and has pursued it as a life long passion.  He trained in Judo and Shorin-Ryu Karate before beginning kickboxing as a teenager.  Jarrod competed at a national level as well as coaching a South Pacific and amateur World Champion competitor.  He sought to pursue traditional Japanese martial arts as an adult and relocated to Brisbane, beginning his study of Shorinji-Ryu Kenyukai Watanabe-Ha Karate under Sensei Jason.  Jarrod has competed at the Oceania Koshiki championship and other local competitions but considers his time spent training under Kaicho Watanabe in Baltimore and Brisbane as his most treasured martial art memories. 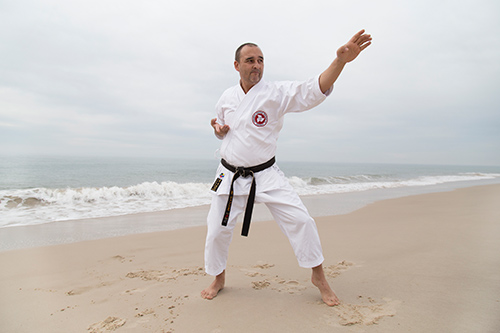